Portrait of a World Changer 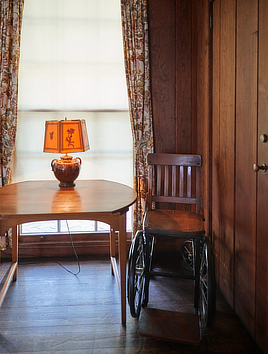 Our thanks to Josh Helms, MA a middle school and high school history teacher and blogger for researching and writing this post. We are happy to share it with you as we celebrate President’s Day. You can follow Josh’s writing at www.gentlemansaurusrexshistoryblog.wordpress.com

Franklin Delano Roosevelt (FDR) was an inspiring figure during his Fire-Side Chats in the Great Depression, a reformer of the economy, and a uniting figure during the bulk of World War Two. This post focuses on something else. You can say this is a lead-up to what the man did in his life, but most people would not consider this specific event to be a gift. If you know anything about FDR, there was one specific thing that made a first impression: it was his wheelchair. This is the story about a man who had his world changed before he changed the world.

FDR was born to a wealthy New York family. As he matured, he increasingly became fond of law and politics. He grew up admiring his fifth cousin, Theodore Roosevelt. When Franklin came of age to be a public servant, he chose that life. Over time, he became a prominent member of New York’s political life. He became a senator and an appointment as Assistant Secretary of the Navy under President Woodrow Wilson. As is common with any career choice, stress soon followed the young political aspirant. Like Theodore, FDR thought of himself as a strapping and fit young man. But soon, the stress of life would get to him. In 1920, the Democratic Party selected him as James M. Cox’s vice-presidential running mate. This would turn into failure as Cox would lose to Republican Warren G. Harding. After all the stress of campaigning, FDR and his wife Eleanor took a break for vacation. This is where FDR would face a foe that would change his perspective on life. This foe was none other than polio.

While on vacation, FDR went sailing in the Bay of Fundy off the coast of New England and Canada. On his excursion, FDR fell off his boat and complained about a tightness in his back. The next day, with his stiff back, he worked out and went swimming, only to complain about weakening leg strength. Three days later, FDR struggled to stand up. Doctors rushed to his side and, in 1921, diagnosed him with polio. Polio or poliomyelitis was a viral infection that typically attacked young children. This virus was still relatively new to the world and there was no cure. Because of this disease, FDR did not regain the strength of his legs or lower back. He used a wheelchair and could walk some with the help of people and crutches. To anyone, this would be an end to their hopes and dreams, or at least a shift in perspective. For FDR, hope was not lost. Sure, running for political office would look different, but it did not stop him.

FDR would become President of the United States of America. He would gain fame during the start of the Great Depression. Over time, that fame gained him votes. As President, FDR started reforms that allowed people to find work. As a teenager living in Colorado, I saw the fruits of FDR’s reforms with the Red Rocks Amphitheater. What FDR would do in reforms was to find places in need of improvements. He would hire people who needed jobs to improve the land. Another example is the Tennessee Valley Authority. This organization came to be under FDR’s famous New Deal. It allowed people to work on the building of dams and hydroelectric facilities to earn wages. Over time, initiatives like Red Rocks Amphitheater and the Tennessee Valley Authority bolstered a weakened American economy.

By 1941, the United States was pulled into World War Two with the Japanese attack on Pearl Harbor. FDR held the nation in unity throughout the years of the war. On April 12, 1945, FDR passed away from a hemorrhagic stroke. His vice president, Harry S. Truman, took the reins of an impressive legacy that FDR left behind.

To me, the legacy of FDR is not a man who changed the shape of American politics, reconfigured a shambled economy, or even united the country during a time of war. It is his example that disability does not have to end one’s dreams and ambitions. FDR did not let his inability to walk dampen his ability to lead. If you’re reading this and wondering about your own disability or challenges, remember President Franklin D Roosevelt surpassed his circumstances to do great things and you can too.

Photo of FDR’s wheelchair in his “Little Whitehouse” in Warm Springs, Georgia. Photo courtesy of the LIbrary of Congress Free to Use and Reuse: Disability Awareness.