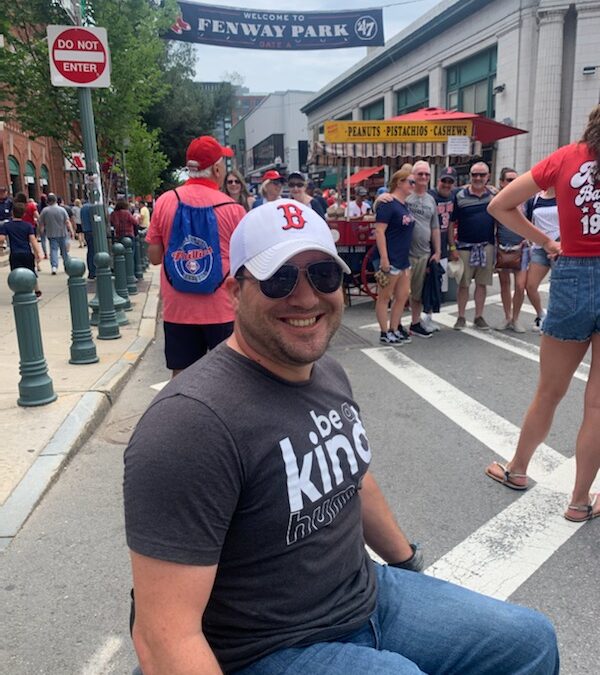 Andrew got his best advice at seven. He wanted to be like his older brother who played little league baseball. Andrew told his dad he wanted to join a t-ball team.

His dad said, “Try it.” Those two words have shaped Andrew’s life.

The third of four children, his parents had no warning he would have spina bifida, an opening of the spine, typically causing partial paralysis. He arrived a month early at just over four pounds and spent his first six months in the hospital.

Andrew sees his life as an example of “The sovereignty of God at play. I was born in 1982, two years after my parents came to Christ, so they were new in the faith when they were thrown a curveball—me.

The doctor said I wouldn’t live past five. He said that if I did, I wouldn’t amount to much, so they should send me to an institution and let others take care of me.

“Thankfully, the nurse in the room who was also a social worker, had better advice. When the doctor left, she shut the door and told my parents to forget everything he said. ‘You fight for this kid. Give him every opportunity you can.’”

Perhaps that was the moment his dad embraced the try it mentality.

The family moved from Rhode Island to Pennsylvania and Florida while his dad studied in seminary and became a pastor. With each move, Andrew’s school experience changed. He was mainstreamed, attended a private Christian school, had some home schooling, and graduated from a public high school.

After high school, Andrew got his associate degree at a community college and then transferred to a small Christian liberal arts school. He thought he’d like to work in children’s or youth ministry, so he pursued a church ministry major which included internships at two churches. These experiences helped him to determine general studies would be a better fit. He didn’t yet know how he’d use his degree, but clung to the assurance God gave him years before, “You’re going to do something for me.”

Executive function skills were difficult, particularly in college. This term includes focus, prioritizing, planning, and tracking, which challenge many people with spina bifida. One way he compensated was tutoring. For every three hours of coursework, he engaged in seven hours of additional coaching with friends from church. He is grateful for the people who helped him get the assistance he needed to complete his studies.

College was more than studies and tutors. He met a beautiful student, Sarah, who shortly after graduation became his wife.

The new Mr. and Mrs. Vacca lived in Florida after their marriage but longed to return to New England. They settled in Boston, where Sarah found employment. Andrew planned to look for work after he tended to his health.

“People born with spina bifida often need a shunt implanted in their head. The device acts like a pump to remove the excess fluid in the brain. A little tube comes down my neck and drains into my abdomen. I was three days old when I had my first surgery.

“Shunts usually last ten years. While in Florida, I saw a neurologist who ran tests and said there were no problems with mine. He suggested my body had reabsorbed the spinal fluids, and I could ignore the shunt.

“Sarah saw it differently. As a medical researcher, she knew something wasn’t right for nearly a year and told me so. For example, I struggled to concentrate to pay bills. Another time, I almost cut my fingers while chopping cheese because my brain failed to warn me of danger.

“Boston turned out to be one of the best places in the country to have surgery. I randomly chose a neurosurgeon from my insurance list, unaware he was the best of the best for shunts.

“At my first appointment, he conducted tests and before he had the results, said, ‘I’ll bet you a month of my salary that your shunt isn’t working and hasn’t for years.’

“When the tests came back, he called me in right way, and arranged surgery on his next day off. The shunt he replaced was so bad it had calcified. So I received my second shunt, not ten years, but thirty-six years after my first!”

Once Andrew recovered from his long-overdue surgery, he began work with the Spina Bifida Association of New England. He enjoyed interacting with their clients and the donors who supported their work. He moved from volunteer to administrative assistant to executive director.

“After eighteen months I realized being an executive director wasn’t in my wheelhouse.”

About this same time, Andrew and Sarah did research on spina bifida and learned Boston is number three in the top five worst places in the US to live with hydrocephalus (the medical term for the fluid buildup) because of the weather patterns and pressure systems. This explained Andrew’s three to five bad days each week of headaches, lethargy, difficulty communicating, and processing.

The same study identified the Orlando area as the best place. Despite their love of Boston, they made plans for him to move immediately to central Florida. Once in Florida, Andrew tracked the number of bad days he experienced after a year. Twenty-eight. A significant difference from the frequency in Boston.

Meanwhile, Sarah splits her time between the two areas. They work hard on their communication and plan regular visits to enhance their long-distance marriage.

When it became apparent that Andrew would return to Florida, he called a man he had met in 2011, Jim Hukill and his wife Rhonette who lead Lift Disability Network. Andrew met them when he volunteered at their first Breakaway camp, a weeklong retreat for families affected by disability. This was the only camp designed for people with disabilities that Andrew attended.

“Within fifteen minutes of being on the campground and around these people, I knew God was calling me, and what he wanted me to do.”

Andrew already had a strong connection with Lift. He and Sarah developed Lift’s Boost program before their move to Boston. Boost connects volunteers from churches with people with disabilities to enjoy a fun night of games and fellowship.

Now back in Florida, Jim welcomed Andrew’s return to the ministry where he serves today. He supports the staff through administrative work; he participates in the ministry outreaches with overflowing joy.

Nearing forty, Andrew reflected on what he would say to himself as a high school graduate.

“I would tell myself; you don’t have to figure it out right now and that’s okay. You don’t need to have all the answers. Sometimes you just need to be quiet and listen. And accept help. I think that’s where I would start.”

Andrew sees his story as a gift. “I want to be an example and encourage the next generation of people with disabilities. I play the cards I’m dealt. I’m not going to make my life into something it isn’t. These are the challenges and struggles I face daily. God is using my life, but it’s only in the last few years I’ve understood his purpose.

“I’ve had people get in my face and say, ‘You’re in a wheelchair, but you’re smiling. You shouldn’t be happy. Why are you smiling and happy?’

“There is no other reply than, this is who I am. I can’t help but be happy because of Jesus.”