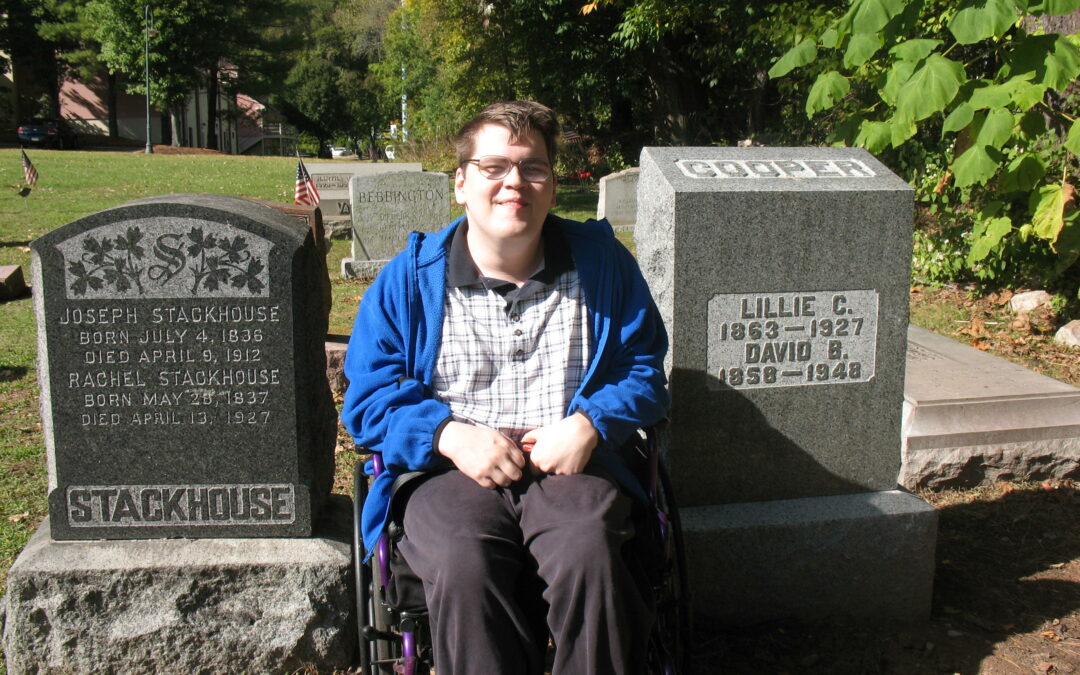 Homeschool parents are creative in educating their children. They find what will capture their child’s attention while teaching the information or skill. That was a dilemma Ben Cooper’s mother, Jeannette, was up against when he needed to learn data entry. Neither of them was particularly computer savvy.

Ben was born with cerebral palsy and developed a keen interest in dogs and clocks. Keen interest is really an understatement. I dare you to talk with Ben about a dog breed with which he is not familiar. Ask him about a dog you mentioned years ago, and he’ll still remember their names. Regarding clocks, as of today, he has 180 in his bedroom alone, not including watches, nor the dozens of other clocks throughout the house.

But clocks and dogs were not what Jeannette used in this lesson. Instead, she gave Ben names and dates of relatives from their family tree and opened membership in an online genealogy service. It was Ben’s job to enter the details into the program on the web. Not only did Ben learn to type and how to find his way around computer programs, but it also taught him how to research. As part of his school project, he and his mom put a book together about their family history.

Now, 17 years later Ben spends hours every day working on genealogy. He has connected the branches of his mother’s tree back 12-14 generations. That’s one generation before they left England to come to America. He is still researching his dad’s side; one of the interesting pieces he’s found is Cooper was the last name for both of his paternal great grandparents, though not related prior to marriage.

For a family who lives a simple life in a rural part of the state, Ben has made connections around the world through his research. And he has met new relatives who are part of his own family tree.

After posting information online about a relative who died at a young age in 1978, he received a message from a man asking for the details to be shared with him, because he believed it was his mother. Ben picks up the story. “I was skeptical at first, but did the research and proceeded cautiously. It turned out the man was correct. Adopted at a very young age, the only thing he knew was his birth mother’s maiden name. He hoped I had a photo of his birth mother, but I didn’t. I could share photos of his maternal grandfather and several of his great-grandparents. He has now met his biological sisters and has been to our house a dozen times to visit.”

In the online genealogy community, researchers like Ben often help one another dig for information, particularly if it is in an area geographically close to them. Ben shares, “There was a lady a couple of years ago who was the step-aunt of someone I helped. She wanted to find her half-brother. She only met him once when he was 2 or 3 years old.” It was a challenging case because after their father’s second divorce, the son’s last name was legally changed to his mother’s maiden name.

Ben continues, “Through marriage indexes online, I found the second marriage and the mother’s maiden name. This info led me to her half-brother’s date of birth and phone numbers. She was shocked when I emailed her the information. She sent me a photo of the first time they met face to face.”

Ben’s dogged pursuit of genealogical records accuracy has taken him into details of a murder, hidden relationships, cross-country moves, and many visits to cemeteries. In the photo above, Ben is sitting between the gravestones of paternal ancestors. One stone had fallen and laid on the ground for many years until Ben had it righted in 2016.

One of Ben’s regrets is not asking his relatives more questions when they were alive. If you want to learn from Ben, he suggests you ask questions to find out the full name of your family members and predecessors, including maiden and middle names. Know the locations of births, marriages, and the number of marriages. It is also helpful to have relatives share the approximate dates of family members’ passing and the location of burial records. This data gives one a launching point for research.

Congratulations Jeannette on a job well done with homeschooling. And thank you, Ben, for using your skills, talents, and passions to help others find answers and some peace with their past.

Ben enjoys the research to discover more about his own roots. He also loves to help others dig for their own. If you’d like to connect with Ben about genealogy, or clocks, or dogs, send him an email in care of Joan@Luke14Exchange.org. I will forward messages to Ben.