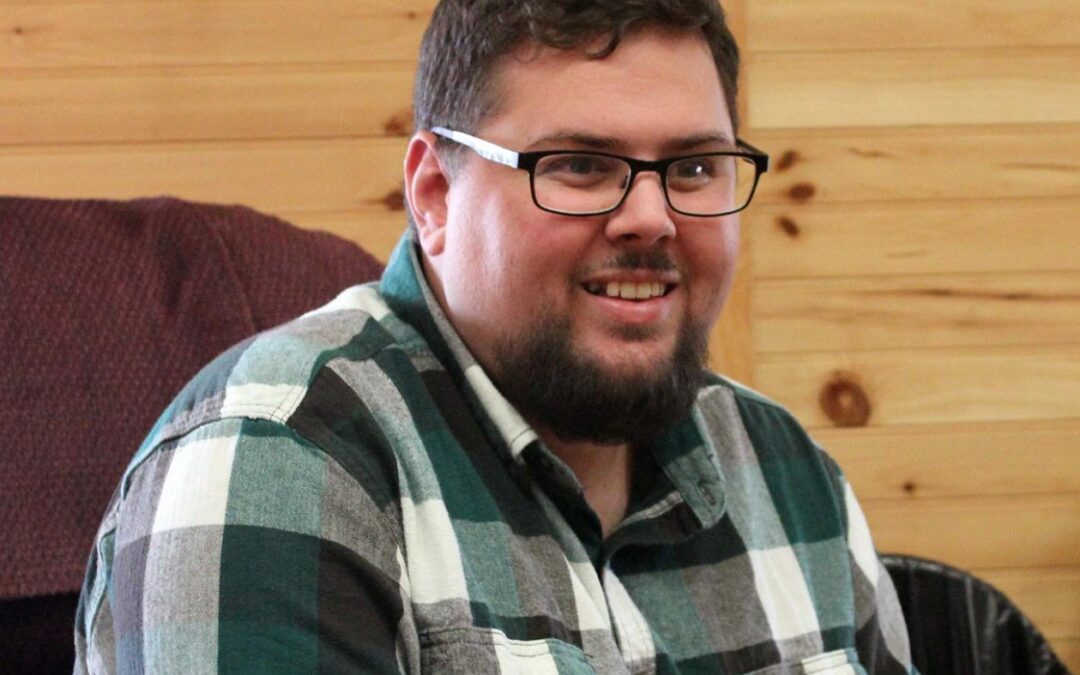 Beginning today, we’ll are posting a story on the first Wednesday of each month. The stories will be about individuals who have discovered their passion, calling, gifts, and talents, even amidst the challenges of living with a disability. If you know of someone whose story we should spotlight, please contact Joan@Luke14Exchange.org. And now for our inaugural story, meet Matt Curcio.

When Matt came to my office, he was a college senior trying to figure out how to fund his disability-related film project. A mutual friend made the connection, hoping our disability ministry would have some leads to share with him. A talented young man, he was also naïve. He took everyone’s word at face-value and was a fanciful dreamer. Matt determined to not let muscular dystrophy rule his life.

Once he graduated and moved on, we lost contact. But through the marvels of social media, one never has to lose contact unless intentional. Over the years, I casually followed him as he moved about the country. He encountered job changes and married his childhood friend.

We reconnected when Matt responded to a question I posed on Facebook, “What has God been teaching you?”

His reply intrigued me. “I’ve learned that disappointment is a gift and is not inherently bad. Not until it marries fear. It exists to show us what we hope for, dream of, and are meant to be. Not to derail us.”

Pondering Matt’s comment, I realized the man who wrote those words ten years after we first met, was someone whose story I wanted to hear.  He was a man who had learned some hard life lessons. He’d grasped an understanding of the urgent and the important. He seemed wise beyond his years. I was certain his wisdom and maturity did not come easily.

At that moment he knew he could and would be a voice for people with disabilities who needed someone to speak for them.

Once a person finds their calling and knows it is the direction they are to pursue, there may still be a long and difficult road ahead. For Matt that involved finishing high school, attending and graduating from college, and many starts and stops in building his career.

Regarding his college years, Matt said, “I don’t think anyone can prepare for life as a person with a disability in college. You have to experience it. Life won’t be easy. In fact, it probably will be harder than you think. Sometimes your face hits the pavement.”

Maybe like Matt, you too have had your face hit the pavement. It may have happened literally when you tripped, fell, and bore the scars for weeks. Or you may have encountered a life-altering disappointment in a job, relationship, finances, or other experience.  At some point in life, it happens to each of us.

Learn from Matt. His favorite way to recover from a face-plant is to connect with his community, particularly his accountability partners. He tells these friends and family members they need to remind him in bad times of the commitments he made in good times. He also gives himself time to live out the anguish. “Sometimes it is walking through it and embracing the emotions but knowing what the truth is and holding yourself accountable.”

Face-plants weren’t just reserved, literally or figuratively, for college. Matt pursued graduate school, moved out of state from his family and roots, and worked for some disability and/or ministry ventures. Several years ago he fell from his scooter and fractured an ankle. The need of rehab sent him 1200 miles back to his family for help. You can read that story here (and watch a ten-minute film of his rehab experience).

And then there is the challenge of other people’s perceptions. If you live or love someone affected by disability, you have probably heard comments about how inspirational you are. Or how impressed a stranger is by watching you do something very routine. Something they are sure they could never do if the situation were reversed. When Matt hears this, his heart replies, “My entire life has been like this. Sir or ma’am, if I did not, I would be dead. I don’t have the choice. Yes, I could lie in bed and give up, or figure out adaptations so I can have somewhat of a normal lifestyle.”

Matt’s a fighter. He suspects he may have been born with more fight than others. When knocked down he comes back swinging harder. Even the best fighter though sometimes has the fight squelched for a time. For Matt that was last summer; he describes that period as whatever lies below the bottom. Now married, Matt and his wife were raising three foster children. Knowing he was responsible for people Matt remembered, “I was still breathing so it meant I still had a life to live; I gotta fight and do it.” Part of doing it meant he worked in sales in the general market to provide for his family, a far cry from his passion for disability advocacy and Break the Roof (BTR), the organization he founded.

Matt continues to fight for his family, his passion, and to not get derailed by the challenges of life. In that fight he found peace. “For the first time in my life . . . I experienced that peace beyond understanding. Part desperation, part complete surrender. There is no one solution to living with a disability, but there are things to build up, to protect yourself when those times happen. 1) Know who you are. 2) Surround yourself with people who know who you are.”

Matt doesn’t know what’s next. For now, he is grateful for a job that takes him back into the disability services world and provides for his family. His passion for Break the Roof is still there, even when the energy to develop it is not. But you’ll hear the energy come back when he shares his desire for BTR to be an umbrella. “I want to bring out the potential in people and organizations. Where are roofs being built over peoples’ potential? What tools can we engage to dismantle and rebuild? What if the shingle of disappointment could be re-manufactured as a brick for one’s foundation instead?”

My recent conversation with Matt concluded with his sharing, “If I ever get to finish that movie I first talked to you about when I was in school, I think we’ll see success found in interdependence, not independence or co-dependence.”

The future of disability ministry and advocacy is in capable hands.

You can learn more about Break the Roof and Matt at www.breaktheroof.org

Please leave a comment below to encourage Matt as he serves his family and people affected by disability.